In the footsteps of tradition 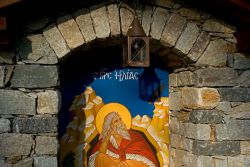 Brother, sister, you have been called to follow Christ in community life and in celibacy. In answering this call, you are not undertaking a new way of living the Gospel. You should be aware of this and know that you are not alone on this road traveled by many Christians over the centuries. Before you, others with the same vocation, expressed in different ways according to the times and places in which they lived, have made this journey: Elijah and John the Baptist, Pachomius and Mary, Basil and Macrina, Benedict and Scholastica, Francis and Clare, and many others. As you can see, you are not alone, but surrounded by a great cloud of witnesses.

Came together and sustained by the Word of God, the small group at Bose began to search for its roots in the monastic tradition. The first members of the community quickly found themselves in the company of a great cloud of witnesses, companions who had preceded them on the same path and who, throughout history, had sought to live the radical demands of the Gospel in different places and circumstances, always walking in the footsteps of the one Lord and Shepherd of every “little flock.” 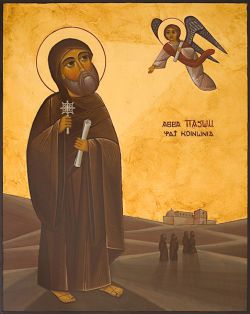 Bose: icon of St. Pachomius - Coptic style
...from Pachomius in particular came the inspiration that shaped the community...

From Pachomius in particular came the inspiration that shaped the community according to the model of a “holy koinonía,” in which each member of the community makes him - or herself a servant of the others, “washing the feet” of his or her brothers and sisters in response to the mandatum novum of the Lord (cf. John 13:1-35).

The first rule adopted by the community was the description of community life in the Acts of the Apostles, the “summaries” (Acts 2:42-47; 4:32-35), intended to guide the community until, in response to a concrete experience of daily life at Bose, a rule could be written on the basis of which each brother and sister would be able to make a life commitment.

Brother, sister, if you choose to live in this community, your only goal is a radical commitment to live according to the Gospel. The Gospel will be the absolute and supreme rule. You have come to the community to follow Jesus. The model and inspiration for your life will be the life of Jesus as it is described and presented in the Gospel. This spiritual rule is provided to help you live according to the Gospel, and especially to encourage in the community a spirit of communion. It is not intended to be a law, but simply a description of life without which nothing can be built or created together with others. It is according to this rule you will evaluate your membership in the community. 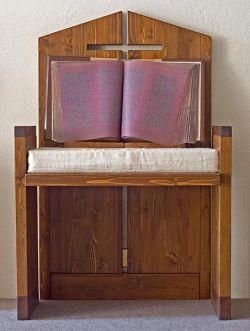 throne of Gospels in the monastery chapter hall
...called to live the Gospel...

After the Rule of Bose had been accepted at the community chapter of 4 October 1971, and after the community had undergone a final period of preparation and had received the approval of Cardinal Pellegrino, the first seven members made their monastic profession at dawn on Easter Sunday, 22 April 1973, in the presence of God and before representatives of the Christian churches to which they belonged. They made a permanent commitment to community life and celibacy, in the conviction that the Christian commitments to poverty and obedience are already implied in the promises made by each person in baptism, the single and definitive event in which the Christian is consecrated to God.

Brother, sister, you are a simple Christian called to live according to the Gospel in response to your first and essential vocation, baptism. Only by walking in the footsteps of Christ will you find your identity in him and return to the Father. It is the Spirit who makes it possible for you to return and who takes the initiative in carrying you to the kingdom. But the Spirit calls and acts in different ways. For this reason you must live as all Christians do, but with a particular focus; the vocation you received and in which you were confirmed at your baptism is essential. You have been called to follow Christ in community life and in celibacy. This means that you will live in faith, love, hope, prayer, and service, with all of your fellow Christians, but also in celibacy, community life, solitude, and continuous attention to God, as Christ has asked of you in particular.