The Rule, the prior, and the synodal structure of the community 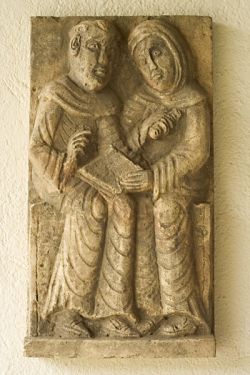 ...the Gospel will be the absolute and supreme rule

Brother, sister, the Gospel will be the absolute and supreme rule. No single community or person can fulfil in a definitive way all of the demands of the Gospel. Only the universal church, over the course of its history, is able to express all of the possible vocations the Gospel contains.

Brother, sister, the Gospel will be the absolute and supreme rule. No single community or person can fulfil in a definitive way all of the demands of the Gospel. Only the universal church, over the course of its history, is able to express all of the possible vocations the Gospel contains.
But since you have chosen to live in community and in celibacy with brothers and sisters for whom you are responsible, you will not be tossed about by every gust of wind. With the Gospel remember to keep in mind your brothers and sisters: they are your living rule. Christ will speak to you in them every time you find it necessary to admit that you do not see clearly, and every time you find yourself unable to respond joyfully to the demands of the Gospel. Do not forget that Jesus is your model of obedience: he “became obedient to death.” His life on earth was a life of complete obedience; he lived repeating the words, “Not my will but yours be done.” Therefore, to be a brother or sister in Christ, you must do the will of the Father. Your obedience is directed to God.
But this obedience to God also asks to be expressed in a concrete and visible way as obedience to the community, which means to your brothers and sisters. 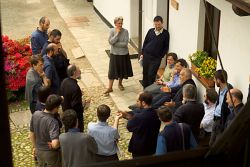 The community expresses its aims and intentions, to which you are bound, in its council. It is certainly true that it is not possible to determine a precise condition in which the community, in expressing its aims and intentions, necessarily reflects the will of the Lord. There are no assurances of this, and nothing can absolutely guarantee that obeying the council of the community automatically means obeying God and obeying the Gospel. However, you should listen to and obey the decisions made by the council, since every agreement reached by the brothers and sisters during the council is the result of a sincere effort to discern the will of God for you and for the community. Each person brings his or her own gifts and strengths to the council, and all of these gifts together make possible the building up of the community and its progress day by day.

Presiding over the unity of the community means no more than putting into practice a gift for assuring unity in the community. The one who presides should serve his brothers and sisters, not dominate them. The gifts of solidity and discernment are essential for him. Solidity will allow him to strengthen his brothers and sisters: he is a sinner like Peter, who denied Christ three times, but like Peter he will undergo conversion and will then be confirmed in the solidity that will allow him to confirm and strengthen the community. The other gift he must have is the gift of discernment, through which unity in the community is established. 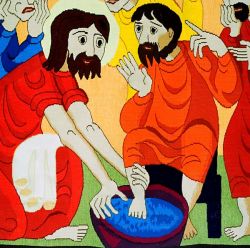 the tapistries of Bose, the Last Supper, detail
...The one who presides should serve his brothers and sisters...

The Rule of Bose is not intended to be a law but rather an instrument of communion, in response to which each person is asked to evaluate his or her membership in the community. The Rule reminds those who read it that “the Gospel is the absolute and supreme rule,” and that “your brothers and your sisters are your living rule.” Obedience is also understood first and foremost as obedience to God, which finds its sacrament in submission to one’s brothers and sisters in the community, all people, and all of creation. Obedience cannot be reduced in a legalistic way to a “law,” and it is not directed only to the person who presides in the community. Obedience addressed to the prior is actually only one example of Christian obedience.

The prior, who presides in the community in virtue of his gifts of solidity and discernment, has the task of assuring unity. In his ability to bring about koinonía, to function as “the eye of the community,” and in his task of guiding the community on its path and of watching over each brother and sister, he resembles the Basilian figure of the proestós or praepositus. The pattern of community life over the years has made visible other aspects of his ministry. As a spiritual guide for the community, he breaks the bread of the Word and interprets it in each situation in which the community finds itself. He is also a spiritual father to each professed brother or sister of the community, as in the monastic tradition of Egypt. 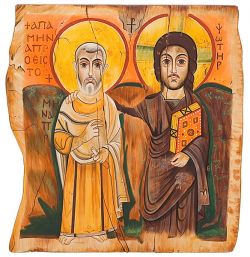 the icons of Bose, Friendship - Coptic style
...the Basilian figure of the proestós or praepositus...

The Rule of Bose makes a provision for other structures of authority in the community in addition to the authority of the prior. These additional structures are intended to maintain a synodal (from the Greek syn-odos, “walking together”) structure in the community: that is, a form of community life in which each member of the community participates in community decision making. The spiritual growth of the community, its growth in numbers, and the other changes it has experienced over the years have led the community to modify in turn the means by which it seeks to maintain this “co-responsibility” in its decision making. However, it has always been the conviction of the brothers and sisters of Bose that a complete and mature response to the demands of the Gospel, as the community perceives them day after day, is only possible with the participation of each and every member of the community. The community now has a discretorio, for urgent situations in which it is not possible or necessary to organize a meeting of the entire community; there is also the council, in which all brothers and sisters who have made their monastic profession participate; the general chapter, in which everyone participates who has completed the accoglienza liturgica; and finally, the assembly, attended by all brothers and sisters who have received the liturgical robe worn during community prayer. The liturgical robe is usually granted at the beginning of the novitiate, and is a first recognition on the part of the community of the monastic journey begun by a new brother or sister.