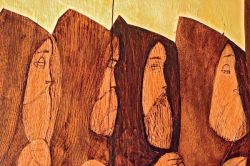 ...Brother, when you arrive in the community with the desire to follow the Gospel...

In the night between 5 and 6 of August we celebrate the definitive monastic profession in the community.

Brother, sister, when you arrive in the community with the desire to follow the Gospel, you do not yet know many things about this life that has attracted you and that you have chosen. You need a period of reflection, during which you can deepen your understanding of the vocation you have received. At the time of your liturgical reception, an authentic love not satisfied with partial or temporary gifts inspires your commitment to stability in the community, according to the vocation you have received, welcomed, and then chosen. At this time, your actions and attitudes begin to take on visibility in the community.

After your vocation has been confirmed within the community, the moment arrives for you, brother, sister, to give your life definitively to God, and to do this before the Church. The liturgy of the profession begins with the invocation of the Holy Spirit, who will inspire in you a firm and unshakable commitment. You will then pronounce your final, irrevocable and free “yes” to the call to live in celibacy and community according to the spirit of the Rule. Before the Church, which will confirm you in the gift you have received, you will pronounce this “yes” in the Holy Spirit to the Father, through Christ, who is the eternal Amen, the true and faithful witness. 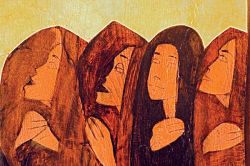 Koinonia, oil and gold painting on wood by Margherita Pavesi, detail
...Sister, when you arrive in the community with the desire to follow the Gospel...

The desire to live according to the Gospel is the only reason for which a new arrival is admitted to the community (cf. Rule of Bose 3). A new member is admitted when his or her request is approved by the council of brothers and sisters. Those who wish to enter the community begin a period of postulancy, the length of which varies from individual to individual. This is followed by the novitiate, which lasts approximately four years. During the novitiate the novice is guided by the novice master, who helps him or her grow as a person and helps the community discern his or her vocation.

The novice’s typical day is divided into two parts: the morning is dedicated to professional work, in which the novice receives training, while in the afternoon classes and meetings introduce the new brothers and sisters to monastic life. The novitiate ends with the liturgical reception, during which the novice makes a total and definitive commitment to live in celibacy and community with the brothers and sisters who have welcomed him or her. The monastic profession, which takes place after at least three more years, is a declaration before the Church of the vocation received, welcomed, and chosen: in the liturgy of the profession, the community and the Church confirm the brother or sister in the gift he or she has received, and recognize and accept his or her ministry.

During the novitiate the brothers and sisters undertake an intensive period of preparation, consisting of a four-year cycle of courses (in Scripture, liturgy, patristic and monastic studies ) offered by the community. Every course is also open to all of the brothers and sisters of the community, as a way of underlining the fact that one’s preparation is never finished. The community has made every possible effort to create a sizeable li brary, which currently includes more than 50,000 volumes and almost 200 periodicals. A brother of the community plans and organizes the program of courses and meetings offered to novices.

Becoming a member of the community: the different steps