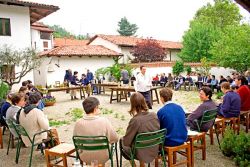 In the course of its thirty-five year history, the community of Bose has been enriched by the arrival of new brothers and sisters from numerous regions of Italy and from abroad. The community now has about eighty members from seven countries.

In the course of its thirty-five year history, the community of Bose has been enriched by the arrival of new brothers and sisters from numerous regions of Italy and from abroad. The community now has about eighty members from seven countries.

Virtually all of the members of Bose are lay people, in keeping with the early monastic tradition and as an expression of the simplicity and lack of visibility that Bose would like to maintain in its relationship with the church. The community wants to serve within the church in the poverty and simplicity that belong to every Christian who, in baptism, commits him- or herself to serve the Gospel, and nothing more. The two Catholic priests and the Protestant minister present at Bose offer the services of their ministry to the community and its guests. Since 1995, the presence at Bose of Monsignor Emilianos Timiadis, Metropolitan of the Othodox Church of Constantinople, who now lives at Bose as a brother of the community after working for many years to promote dialogue and communion among the churches, has been a great gift of the Lord to the community.

Beyond certain exceptional events accorded to the community through a gift of grace, the meaning and “purpose” of Bose continue to be centered solely in its radical commitment to live according to the Gospel. For each member of the community, living this radical commitment means interiorizing the demands of the Gospel and living one’s poverty, obedience and celibacy in the depths of one’s being. For each person, this search for inner unity becomes a way of giving oneself in undivided attention to God, and also a way of letting one’s life become a credible and authoritative sign of unity and peace for one’s brothers and sisters and for the people one meets. In monastic life it is the Holy Spirit who calls the brother or sister, through the ministry of others, and not the church by means of its episcopal ministry, as is the case for ordained ministers. For this reason, the sign offered by monastic life to the church and the world requires a creative and constantly renewed faithfulness to the call of the Lord in order to continue to communicate its message. A monastic community may carry out various services and ministries in response to a demand of the Gospel or a request from the church, but none of these services constitutes the fundamental identity of monastic life as it is lived by the community.