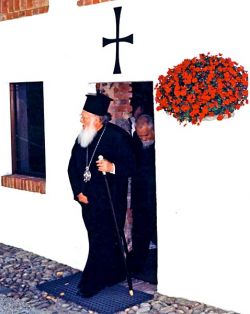 Bartholomeos I, Archbishop of Costantinopoli and Ecumenical Patriarch, visits Bose

At Bose on May 18 and 19, 1997, during the extraordinary and unhoped-for visit of his Holiness Bartholomeos I, Archbishop of Constantinople and Ecumenical Patriarch, Enzo Bianchi, founder and prior of Bose, often repeated to his brothers and sisters the words of the Lord, “Do not be afraid any longer, little flock, because your Father is pleased to give you the kingdom” (Luke 12:32). Why did he repeat these words, in their original context unquestionably words of consolation, in a moment of great joy?

At Bose on May 18 and 19, 1997, during the extraordinary and unhoped-for visit of his Holiness Bartholomeos I, Archbishop of Constantinople and Ecumenical Patriarch, Enzo Bianchi, founder and prior of Bose, often repeated to his brothers and sisters the words of the Lord, “Do not be afraid any longer, little flock, because your Father is pleased to give you the kingdom” (Luke 12:32). Why did he repeat these words, in their original context unquestionably words of consolation, in a moment of great joy?

In fact, an awareness of the deeper meaning of these words spoken by Jesus to his disciples is the best way to understand the identity of the monastic community of Bose, the identity it has had from the beginning and has kept even though it has grown in numbers and in visibility. If Jesus promises the kingdom to those whom he calls a “little flock,” he also defines with these words the status of every Christian community that wishes to receive from the Lord the fullness of life of his kingdom. 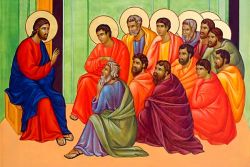 the icons of Bose - farewell discourses, C
...together with others who share your vocation...

Brother, sister, you would not have been able to accomplish very much alone. Together with others who share your vocation, you can remain in the unity of a faith capable of transporting obstacles as big as mountains. The community, even if its members are few, remains the “little flock” that hopes against all hope. For you, poverty will mean a daily effort of simplification that will make you one of the poor of Yhwh. You know very well that even if you do not show exterior signs of your vocation, the visibility of the community will make it difficult, if not impossible, for you to share the poverty of those who are destitute, rejected, and oppressed. You will find it easy to be welcomed, honored and respected, which the poor are not. For this reason, your own poverty must be accompanied by a spirit of great humility, both in the community and outside of it: a sense of your own smallness and an attitude that flees honors and distinctions. 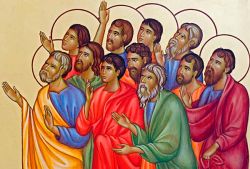 the icons of Bose - Ascension - Italic style
...faithful to its vocation....

The flock has grown in size, and the small sign it constitutes has assumed, over the years, a visibility of which the community often feels unworthy. The community often feels “overexposed”, especially within the church. It is aware that the flock, in order to remain faithful to its vocation and continue toward the promised kingdom, must remain “small”, that is, always conscious of being nothing more than a community of sinners who receive forgiveness from God to the extent to which they recognize their own sin and their own smallness. The community knows that the flock can be led together to salvation only through its trust in the one Shepherd. Even though it sometimes finds itself the object of criticism, distrust or malevolence, even on the part of friends, it continually examines itself not on the basis of the approval or disapproval it receives from others, but on the basis of the quality and authenticity of its own sequela Christi.

Agnus Dei, fireclay, tympan above the church door
...buried with Christ into death...

The community is also aware that the life of those who let themselves be immersed in the waters of baptism is truly already “buried with (Christ) through baptism into death” (Rom. 6:4) and “hidden with Christ in God” (Col. 3:3). We were reminded of this recently by the news of an experience of martyrdom – a possibility in Christian life that we thought was lost somewhere in the recesses of memory, but that has in fact reappeared on the horizon of Christianity. The life of the baptized Christian has already been given to God and to those with whom we live in the world, as Fr. Christian de Chergé, prior of the Trappist community of Atlas in Algeria, wrote in his spiritual testament several months before he and the brothers of his community were killed.

“If we have grown into union with Christ through a death like his, we shall also be united with him in the resurrection” (Rom. 6:5), continues Paul. We also believe and want to proclaim with our lives, to everyone we meet, that it is only by searching for and finding a reason for which it is worth dying that we are also given a reason to live.