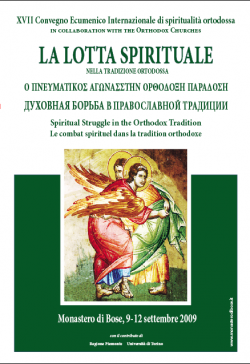 XVII International Ecumenical Conferences on Orthodox Spirituality
Bose, 15 September 2009
XVII Ecumenical Conference
The conference was a space of brotherly encounter among the Christians belonging to various Christian traditions about the theme of discernment and struggle against evil thoughts

SPIRITUAL STRUGGLE
IN THE ORTHODOX TRADITION

“There is a specific place in which spiritual struggle occurs … This place is the central human organ that the Bible calls the ‘heart’ (lev, kardía)”. With these words contained in his opening address, Enzo Bianchi, the prior of Bose, outlined the inner space and time that characterize spiritual struggle in the biblical anthropology. “Spiritual struggle in the Orthodox tradition” was indeed the theme of the 17th edition of the International Ecumenical Conferences on Orthodox Spirituality, which was held at the Monastery of Bose from 9 to 12 September 2009 and was organized in collaboration with the Orthodox Churches.

The opening address of Enzo Bianchi, prior of Bose, and the lecture of metropolitan Filaret of Minsk, patriarchal exarch of Belarus and president of the theological commission of the Patriarchate of Moscow, respectively focused on the biblical approach and the Orthodox understanding of spiritual struggle. The convergence of these two perspectives is particularly evident in the hymn contained in the Letter of saint Paul to the Philippians. It offers the theological foundation for the struggle that every Christian fights in his heart against whatever alienates him from his humanity and estranges him from God. The Christian is called to enter the same struggle that Christ himself fought against evil and death, letting in this way the light of resurrection shine in the depths of the hell that humankind knew and still knows in his history. “[Jesus Christ], being in the form of God, did not count equality with God something to be grasped. But he emptied himself … accepting death, death on a cross. And for this God raised him high, and gave him the name which is above all other names; so that … every tongue should acknowledge Jesus Christ as Lord, to the glory of God the Father” (Phil 2:6-11).

The four days of the conference explored the manifold meanings of spiritual struggle in the church fathers (John Climacus, Maxim the Confessor, Barsanuphius of Gaza) and in the different Orthodox traditions (Russian and Greek, Serbian and Bulgarian) with their long history and their difficult contemporary situation marked by individualism, indifference towards the other, inner weakness of the post-modern man and woman. The two final addresses, the one by metropolitan George of Mount Lebanon (“Spiritual Struggle for Church Unity”) and the other by metropolitan Kallistos of Diokleia, delegate of the patriarch of Constantinople Bartholomew I (“The Spiritual Struggle in the Contemporary World”) went in this line.

The conference was a space of brotherly encounter among the Christians belonging to various Christian traditions about the theme of discernment and struggle against evil thoughts. This exercise of inner freedom is a fundamental task that all Christians are called to fulfil. The important ecumenical relevance of the meeting is particularly witnessed by the greetings that the following Church leaders sent to the participants in the proceedings of the conference: pope Benedict XVI through the words of cardinal Tarcisio Bertone, secretary of State; cardinal Leonardo Sandri, prefect of the Holy Congregation for the Oriental Churches; cardinal Walter Kasper, president of the Pontifical Council for the promotion of Christian unity; Bartholomew I, patriarch of Constantinople; Kirill I, patriarch of Moscow; Ignatius IV, patriarch of Antiochia; Daniel I, patriarch of the Romanian Orthodox Church; Ieronymos, archbishop of Athens; Karekin II, catholicos of All Armenians; Rowan Williams, archbishop of Canterbury and primate of the Church of England; Gennadios, metropolitan of Malta and Italy; Volodymyr, metropolitan of Kiev and all Ukraina; rev. Samuel Kobia, general secretary of the World Council of Churches in Geneva.

As regard the Catholic Church, the bishop Brian Farrell, secretary of the Pontifical Council for the promotion of Christian unity, and fr. Milan Žust, S.J., of same Vatican department, were present; cardinal Roger Etchegaray, vice-dean of the Sacred College of cardinals, archbishop Antonio Mennini, apostolic nuncio, representative of the Holy See to the Russian Federation, mgr. Gabriele Mana, bishop of Biella and local ordinary, mgr. Arrigo Miglio, bishop of Ivrea and secretary of the Bishops’ conference of Piedmont, and mgr. Massimo Giustetti, emerit bishop of Biella were also present.

The Patriarchate of Moscow was represented by bishop Amvrosij of Gat?ina, rector of the Theological Academy of St Petersburg, who headed the official delegation, fr. Dimitrij Ageev and Aleksej Dikarev of the Department of external relations. Archbishop Zosima of Elista and Kalmykija and fr. Pavel Velikanov, representative of the rector of the Theological Academy of Moscow, also participated in the proceedings of the conference. The Orthodox Church of Greece was represented by fr. Savvas, delegate of the Holy Synod, and arch. Iakovos (Bizaourtis), igumen of the Petraki monastery.

As the presence of numerous monks and nuns of Orthodox monasteries (Greece, Russia, Bulgaria, Romania, Mount Sinai, Georgia, Armenia), as well as from Catholic and Reformed (Belgium, France, Italy, Switzerland, Hungary) testifies, the Ecumenical Conferences on Orthodox spirituality wish to offer a space of brotherly encounter among the various Christian Churches, a space of communion and sharing of their multiform spiritual traditions, as reminded by fr. Michel Van Parys, on behalf of the scientific committee, in his concluding remarks. For this very reason, the prior of Bose, after his final words of thanks, already announced that the 18th edition of International Ecumenical Conferences on Orthodox Spirituality will be held from 8 to 11 September 2010. The topic of the conference will be decided during the next planning meeting of scientific committee and will be published on the community’s website soon afterwards.