Message from Bartholomew I, ecumenical patriarch 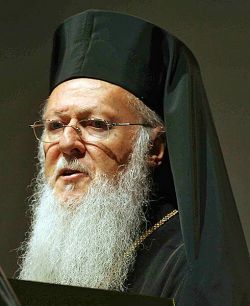 BARTHOLOMEW I, Archbishop of Constantinoplie and Ecumenical Patriarch
This year's topic of focus, namely "The Spiritual Struggle in the Orthodox Tradition," will provide opportunity to discuss the importance of the ascetic tradition in our world

It is with great pleasure that we respond to the gracious invitation by the Very Reverend Enzo Bianchi, Prior of the Monastic Community of Bose, that we extend a word of greeting to the participants of the XVIIth International Ecumenical Congress to be held between September 9 and 12, 2009.

These conferences on a variety of themes related to Orthodox Spirituality have, over the years, enriched the academic and ecumenical discourse inasmuch as they assemble some ol the world's leading thinkers, theologians and ecclesiastical leaders. Moreover, they are ample evidence of the unique contribution of monasticism to ecumenical relations amon Christian confessions. This year's topic of focus, namely "The Spiritual Struggle in the Orthodox Tradition," will provide opportunity to discuss the importance of the ascetic tradition in our world.

On this occasion, although we shall he with you in prayer, inasmuch as we are unable to attend in person, our official representative will be his Eminence Metropolitan Kallistos, whose teaching and writing have long focused on the ascetic tradition through the ages.

Therefore, we convey our sincerest congratulations to the organizers and hosts as well as our fervent wishes on speakers and participants at this intellectual and spiritual symposium.