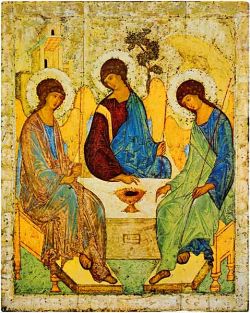 Communion is the divine life of the Trinity, a life of mutual listening, dialogue, and giving among the divine persons...

Words of Spirituality
by ENZO BIANCHI
The Word of God summons and assembles all believers and binds them together in one body, and this dynamic action

In Christian revelation, communion is first of all a theological reality. God in his own being is communion, the Spirit is the Spirit of communion, and Christ is a corporate Person, the head of the body that is the church. Communion is the divine life of the Trinity, a life of mutual listening, dialogue, and giving among the divine persons. Since it is a fundamental aspect of the divine life, communion is also essential to the church: if the face the church presents to the world is not a face of communion, the church is reduced to a sociological organization and is no longer the church of God. The church is called to be a place where all cultural, social, political, and ethnic barriers and forms of discrimination are overcome. As a place of reconciled diversity, where differences are brought together in communion, the church is not only a reflection of the dynamic communion that unites the persons of the Trinity; it is also an icon of humanity reconciled, an image of the redeemed cosmos, and a prophecy of the Kingdom. And this is exactly what every Eucharist, as the heart of communion, should make manifest. Communion is the criterion that reveals whether or not the church is obedient to the vocation it has received from God, and whether or not it is carrying out its testimony and mission in the world.

As the depth of the divine life, communion is shared with humanity by God, who impoverishes, empties and humbles himself out of love, and in so doing expresses his desire for communion with men and women. "God so loved the world that he gave his only Son, that whoever believes in him should...have eternal life" (John 3:16); "Since therefore the children share in flesh and blood, he himself likewise partook of the same nature" (Hebrews 2:14). The wellspring of communion is love, and it takes place when we exchange a higher place for a lower one, just as the One who was in the form of God emptied himself, taking human form and sharing the human condition to the point of death, "even death on a cross" (Philippians 2:8). In summary, the form and the foundation of Christian communion is the mystery and passion of love that is the cross. If we say this, we also acknowledge that communion within the church, among the churches, and between the church and all people is a gift of God! It is not programmable or achievable as the objective of a strategy of ecclesiastical politics, but must be welcomed as grace. We can prepare ourselves to receive the gift of communion through our radical obedience to the Gospel and by listening to others: those with whom we live, Christians of other denominations, those who belong to other religions and cultures, and those who do not believe in God.

We should remember in this context that Christian communion, which descends from the Trinity, is formed by the cross, and is constantly revitalized by the Holy Spirit, demands that the church and each Christian reject both every evasion of responsibility ("Who is my neighbor?", Luke 10:29) and every affirmation of self-sufficiency ("I do not need you," 1 Corinthians 12:21). At the same time, communion within the church cannot be grounded solely in a horizontal principal of attentiveness to the other or need of the other. If a church centers all of its attention on 'the other,' it faces the risk of becoming an affective community closed within the emotional gratification of an exclusive 'I-you' relationship. Or it may lapse into rivalry and confrontation, adopting an 'I against the other' stance and a missionary initiative that becomes imposition, and taking on the appearance of a sect that is aggressive toward the world. As yet another possibility, it may define itself as a source of charitable aid, a benefactor, or a philanthropic organization. In the first case communion atrophies and becomes sterile, in the second it is misunderstood and betrayed, and in the third it is reduced to charitable activity.'The other' is not enough: we also need 'the Third' and his transcendence. It needs to be clear that from a Christian perspective, the 'other' always refers us to a Third who is the Lord, the Creator of all people, and the One who has formed each man and woman in his own image.

It is the Word of God - the Word that purifies our words, gives our communication its form, and presides over our relationships - that creates koinonía, communion, and not our own words. Karl Barth writes, "The church is the continually renewed communion of men and women who listen to and give witness to the Word of God." The Word of God summons and assembles all believers and binds them together in one body, and this dynamic action of the Word is the wellspring from which the church and the ecclesial communion draw their vitality. It is this communion that the sacramental signs of baptism and the Eucharist also seek to build up, because "by one Spirit we were all baptized into one body" (1 Corinthians 12:13), and "Because there is one bread, we who are many are one body, for we all partake of the one bread" (1 Corinthians 10:17). Christians truly are communicantes in Unum, in the one God, the Father, through the one Lord, Jesus Christ, and the one Spirit (cf. Ephesians 4:4-6). In their communion with the One who is the source of all holiness, Christians, who already live in solidarity with sinners, can also take part in the communio sanctorum, communion with the saints in heaven, who already live forever in God. Only then is the church understood in the fullness of its mystery as communion.