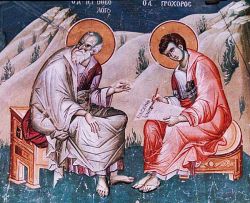 Monastery of Bose, 18-21 September 2008
XVI INTERNATIONAL ECUMENICAL CONFERENCE
The prior of Bose Enzo Bianchi has announced that the next Conference will be held from 9 to 12 September 2009 and will deal with the theme of the spiritual struggle

SPIRITUAL PATERNITY
IN THE ORTHODOX TRADITION

PHOTOS FOR THE PRESS

The 16th International Ecumenical Conference on Orthodox Spirituality was held at the Monastery of Bose (Province of Biella, Piedmont, Italy) from Thursday 18 to Sunday 21 September 2008. Organized by the Monastery in cooperation with and under the joint auspices of the Ecumenical Patriarchate of Constantinople and the Patriarchate of Moscow, the Conference offered an occasion for a fraternal exchange of views and shared reflection on essential topics of spiritual life, where Eastern and Western Christian tradition meets the profound questions that beset modern man.

This year the Conference was dedicated in a particular way to the memory of Emilianos Timiadis, Metropolitan of Silyvria (1916-2008), illuminating witness of the spiritual tradition of Orthodoxy in the contemporary world, and treated the topic of “Spiritual Paternity in the Orthodox Tradition”, which was investigated in its biblical, spiritual, liturgical, theological and anthropological aspects, evoking the entire Orthodox spiritual tradition in all its harmonious voices. “Spiritual Paternity” lies at the very heart of Orthodox spirituality; it is indiscutably one of its cardinal points and a means of essential growth in the interior life of man.

The eastern and western churches represented

The Patriarchate of Constantinople was represented by Bishop Athenagoras of Sinope, who lectured on the subject: “A Contemporary Spiritual Father: A Memory of Metropolitan Emilianos of Silyvria (1916-2008)”; the delegation of the Patriarchate of Moscow, lead by Bishop Savvatij of ?eboksarsk, was composed by Fr Georgij Sergeev of the Department for the External Relations, Fr Pavel Khondzinsky, Fr Gerasim Djachkov, of the Theological Academy of Moscow, and by hieromonk Daniil Vasilenko of the same Academy.

The Catholic Church will be represented by Cardinal Achille Silvestrini, prefect emeritus of the Congregation for the Eastern Churches, Mons. Brian Farrell, Secretary of the Pontifical Council for Promoting Christian Unity, and Fr Milan Žust, S.J., of the same Council; during the Conference proceedings, there will be interventions from a number of bishops of the Piedmont Episcopal Assembly, among them from its secretary, Mons. Arrigo Miglio, Bishop of Ivrea, and Mons. Gabriele Mana, Bishop of Biella responsible for the local diocese.

This year the Church of Greece was represented by Bishop Ioannis of Thermopylae. There were also important representations from the Orthodox Churches of Antioch; Ukraine (Bishop Filipp of Poltava and Kremen?ug); Serbia (Fr David Perovic of the Theological Faculty of Belgrad, delegate of the Holy Synod of the Serbian Orthodox Church, Archimandrite Andreij Cilerdzic and Fr Vasilje Grolimund); Romania (Metropolitan Serafim of Germany, who made the concluding intervention); Bulgaria (Bishops Grigorij of Veliko Tarnovo and Kiprian of Traianopol); Georgia (Fr Khakaber Kurtanidze); Armenia (Fr Karen Karamyan, Delegate of the Supreme Katholikos of Etchmiadzin H.H. Garechin II); of the Ecumenical Patriarchate Orthodox Archdiocese of Italy (Archimandrite Athenagoras Fasiolo); of the Church of England (Canon Hugh Wybrew); of the Old Catholic Church of the Netherlands; of the Coptic Church.

Furthermore, the presence of numerous monks and nuns from monasteries in the East (Greece, Russia, Bulgaria, Romania, Mount Sinai) and West (Belgium, France, Italy, Switzerland) contributed in creating alongside the proceedings of the Conference a fraternal climate of communion and sharing of respective spiritual traditions.

The topic, far too broad to be exhausted in the framework of a single conference, was approached in two complementary stages. At first, the floor was given to Orthodox witnesses (in the Byzantine, Russian, Serbian, Bulgarian and Romanian traditions) and also in part to Latin monastic tradition; the second stage, on the other hand, tried to show how spiritual paternity, and therefore obedience to a spiritual father, was concretely experienced not only in monastic environments but also by lay men and women committed to their contemporary society.

In his Conclusion, read in the name of the Scientific committee, Fr Michel van Parys summarized the contents of the Conference.