Conclusion of the Conference 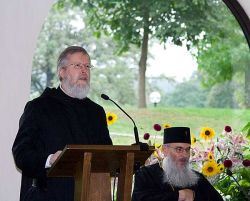 Listen to the conclusion of the Conference (in French):

Our 16th International Ecumenical Conference on Orthodox spirituality was dedicated to Spiritual paternity in the Orthodox tradition. We are all extremely grateful to the monastic community of Bose for organizing in such a heartfelt and dedicated manner these annual meetings, which are held with the paternal blessing of the ecumenical patriarch Bartholomew I and of the patriarch of Moscow Alexis II. These conferences are truly a gift of friendship to the Churches of the West and also an occasion of encounter and of spiritual experience for the Orthodox Churches.

This year’s conference took place in a certain sense at the feet of a spiritual father of our time, metropolitan Emilianos of Silyvria (1816-2008), who fell asleep in the Lord a few months ago. He was a man retro et ante oculatus, who turned his gaze on the tradition of God’s Word and of the holy fathers and at the same time was a prophet and seer who scrutinized the future of the Church and of today’s world. The testimony of bishop Athenagoras of Sinope made him present to us. He would certainly have been happy to see that our discussions reflected his preoccupation about roots and about perspectives.

The topic of spiritual paternity is too vast to be treated adequately in a single conference. It is too vast, so that we were able to present only a few great figures of spiritual fathers and mothers, of the distant past and of times closer to our own. In addition, we had to limit ourselves to a few Orthodox Churches; we were able to meet great spiritual figures of Byzantine, Greek, Russian, Serbian, Romanian, and Georgian Orthodoxy. We would have liked to meet as well spiritual fathers and mothers of Bulgarian, Arabic, Albanian Orthodoxy. We must add, however, that the preceding conferences have already evoked a large number of these spiritual figures.