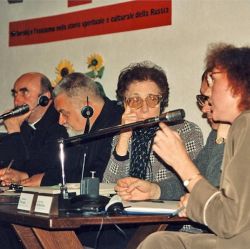 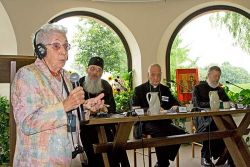 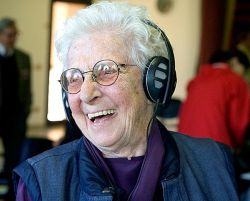 Today the beloved Nina Kauchtschischwili (20 August 1919-4 January 2010), distinguished Slavist scholar and tireless searcher of the unity among Christians, passed away from this world to the Father. We remember with affection and gratitude her passionate work for the organization of our International Ecumenical Conferences on Orthodox Spirituality, offering her contribute for the scientific projects of the Russian section. We also remeber her great love for the Russian Orthodox Church, her passion for the Russian thought, her living faith, her unshakable hope for the Christian unity.

The many different languages spoken by Nina were actually the many different faces that she was able to welcome and love. In this way she brought the ones who were far away closer and what looked like foreign to waht is peculiar to the human being.

The Prior Br Enzo and the community fraternally join in the prayer of those who know and love her. According to her desire, a delegation from the community will be present at her funeral.

We rely on her prayer and intercession by God for all of us.

read in this book:
NINA KAUCHTSCHISCHWIlLI