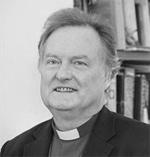 Bishop John was first drawn to the riches of Orthodoxy when studying at the Ecumenical Institute, Bossey , in 1982, where, through the lens of Rubliev’s Icon of Hospitality, the Holy Trinity, he studied the notion of perichoresis in the Orthodox tradition, under the tutorship of one who is now the Patriarch of Romania, Daniel. Since then, he has written papers on Hesychia in the Orthodox tradition and on the Theology of Iconography. He has been a friend and regular visitor of the Holy Monastery of St John the Baptist in Essex over the last 25 years and has been greatly enriched by the lives and writings of St Silouan of Athos and his disciple, Fr Sophrony, the founder of the Monastery. He has visited several monasteries, Vatopedi, Karakalou and St Paul’s, and a skete, Prodromou, on the Holy Mountain. His studies of the Jesus Prayer have led him also to the Holy Monasteries of Moldavia, and the work of Paisius Velichkovski in popularising the Jesus Prayer in the 18th century.

Since 2006 he has been a member of the International Theological Commission for Anglican- Orthodox Theological Dialogue. For this he has contributed papers on Repentance and Holiness and on Sacrifice, Salvation and Community towards the publication of the Commission’s recent report In the Image and Likeness of God: A Hope-Filled Anthropology. As part of the Commission, he has been much enriched by his experience of the Orthodox Church in Crete, in Albania and Serbia. He has also spent time in Russia, visiting the Patriarchate and monasteries in Russia.

He has visited regularly the Holy Lands building relationships with Eastern and Orthodox Churches there. In 2007, he visited Syria, on behalf of the Archbishop of Canterbury, spending time in Damascus, in Aleppo and in Hasakeh, meeting with Christian – and other faith – leaders there.