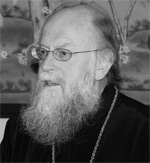 Andrew Louth isa priest of the Russian Orthodox Patriarchal Diocese of Sourozh since 2003 and serves a parish in Durham. His collegiate education was at the Universities of Cambridge and Edinburgh where he studied Mathematics and Theology and prepared his thesis which concerned Karl Barth. After graduation he taught early Christian theology and patristics in the University of Oxford and early Medieval and Byzantine history Goldsmiths College in the University of London. Fr. Louth has been Professor of Patristic and Byzantine Studies at Durham University since 1996. He teaches courses on the history and theology of the Christian Church: an undergraduate module dealing with the impact of the rise of Islam on mostly Greek Christianity in the eastern Mediterranean and a Master of Arts module on the understanding of what it is to be human in early Christian theology. His interests in research lie mostly in the history of theology in the Greek tradition, especially in Byzantine period. He is also interested in later periods including the modern period; that is the nineteenth century and later, where his research includes Russian and Romanian Orthodox theology. His interest in the theology of these periods is not purely historical, since he regards dialogue with the theological writers of the past as a resource for theological reflection today. His also concerned with the Christian Mystical Tradition. His books include: Origins of the Christian Mystical Tradition: from Plato to Denys, Discerning the mystery: an essay on the nature of theology, books on Dionysios (or Denys) the Areopagite, Maximos the Confessor, and John Damascene, and on the tradition of desert spirituality in the Christian tradition, both east and west (The Wilderness of God), Greek East and Latin West: the Church AD  681-1071; Modern Orthodox Thinkers. From Phikokalia to the present (2015). His also editor of the journal Sobornost, and editor, with Professor Gillian Clark of Bristol University, of the series Oxford Early Christian Studies.

Seeking Communion, Confessing the Truth. Maxim the Confessor and Pope Martin I

The paper looks at the case of the Greek monk Maximus the Confessor and Pope Martin V, both of whom remained faithful to the ecumenical councils and courageously confessed the faith in the middle of the seventh century. This put them in opposition to monoenergism and monothelism, doctrines promoted by the emperors, who, under the pressure of the Muslim invasions of the Eastern provinces, tried to unify Christian divisions provoked by the Council of Chalcedon (451). This case proposes for consideration the question: how can there be a conflict between the requirements of communion an those of truth? Actually, the case of the two saints shows how the search for communion and the witness of faith appear in conflict if the search for communion serves interests other than those of the Church’s faith. In such a case, martyrdom and the confession of faith, as of these two saints, is the only means of guarding and keeping the authentic communion in truth with the universal Church.