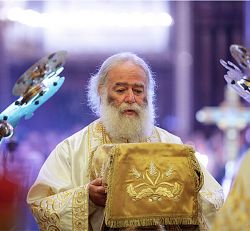 Theodoros II, pope and patriarch of Alexandria and all Africa
Monastery of Bose, 4-7 September 2013
XXI International Ecumenical Conference
From Alexandria we pray for the restoration of unity, love, forgiveness, justice, and peace in humanity

THE AGES OF THE SPIRITUAL LIFE

It constitutes an exceptional source of spiritual jubilation that I have the opportunity to address the organizers of and participants to the XXI International Ecumenical Conference on Orthodox spirituality, convened in Bose to contemplate over and discuss about the Ages of Spiritual Life. Your thematic choice amounts to a tangible proof that spirituality is more than ever necessary in our materialistic, consumerist, technocratic times. Thus wholehearted congratulations should be expressed to His Very Reverence Fr. Enzo Bianchi, Prior of Bose, who has creatively worked so as this Conference to take place and enrich Christian theology with its proceedings on annual base.

For Christian theology, the Church of Alexandria is the one that turned the universality of the world created by Alexander the Great and his Diadochs into a catalytic force for the spread of Christian truth. It is the Church within which the word of God triangulated with the two most ancient civilizations of the Eastern Mediterranean, the Egyptian and the Greek.

Nonetheless the kudos of a Christian institution is not judged only by the footprint it leaves on the passage of time, while it is in its prime. Much more it is judged by the patience and persistence that showcases to maintain intact Christian tradition in the desert of time. After two millennia, the Church of Alexandria, from the Middle East, the cradle of Christianity, keeps on disseminating the diachronic ecumenical message of Christianity, as this was preserved and proclaimed over time by the successors of the Apostle Mark, in Africa.

From Alexandria we pray for the restoration of unity, love, forgiveness, justice, and peace in humanity. We work on the field so as people both in the Middle East and in Africa, citizens and politicians, to build a culture of coexistence based on mutual respect of individual and collective cultural and religious references. We assert the self-consciousness of Orthodoxy that man, as God's image, has roots, incomparably superior to the irrational instincts that trigger senseless violence. We do not lose our hope that soon the harsh reality of suffering and ordeal will give its position to the resurgence of humanity, because God is revealed not in power but in truth; the truth of His love for the crest of His creation; the human being.

Therefore, wishing every success to your Conference, I urge all of you to unite with us in praying, especially now that the drums of war once again vociferously beat and opposing sides once again venture in opening the Pandora’s Box in the Middle East, without being able to predict the outcome of such an action.

Fervently praying to the Almighty God,

Theodoros II
pope and patriarch of Alexandria and all Africa